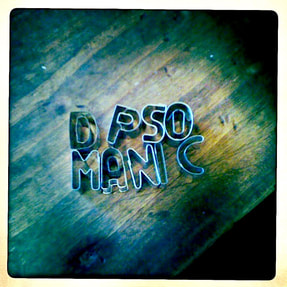 DIPSO MANIAC
This surreal thriller focuses on a volatile boozehound named Dipso Maniac who must decide whether to forgive or avenge his own death.
​
It's 1705 and a husband shoots his wife then himself. Three hundred years later, the murdering husband reincarnates as Ian—a fun-loving guy in SF—who lives under the watchful eye of Mr. Dipso Maniac.

Dipso Maniac, we later learn, is the soul of the wife who was killed, who is now trapped in Limbo (a dingy bar), consigned with determining the Ian’s fate. To that end, Dipso enlists demure, anxious Katie to be his earth-bound help. He plagues her with a series of disturbing visions that he puppets ala Freddy Kruger across universes. The visions involve the murder of Katie's neighbor, Ian.

Katie realizes that she is being warned: Ian is about to be killed. But is Dipso driving Katie to commit the murder or prevent it?

​Here’s the rub: If Dipso seeks revenge for his own death three hundred years earlier and kills Ian, he will not evolve and so must then repeat another life with him. If Dipso lets Ian live, he will break their destructive cycle but he will lose him forever—Ian, his soul mate.